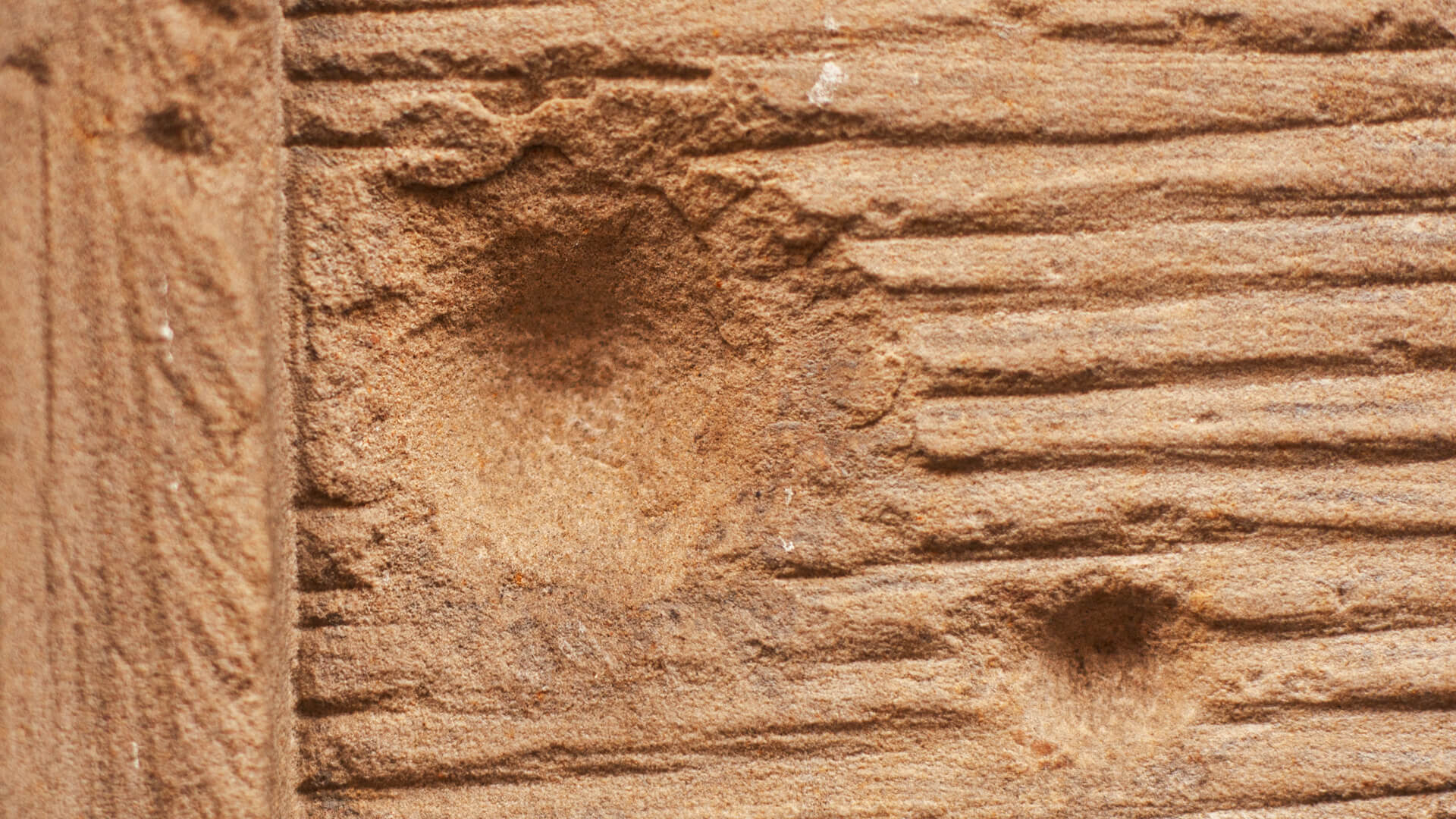 The town house at 7 Nowomiejska Street does not stand out from the neighbouring buildings. On closer inspection, however, we will discover traces that make it unique. Bullet-holes riddle the stone portal with metal-bound, decorated doors dating from the 18th century. It has survived, even though the town house itself – like nearly 85% of the buildings in the Old Town of Warsaw – had been ruined during the uprising. During the reconstruction of the town house in 1954-1955, it was decided to use original parts of the demolished building. In this way, any historical elements of the structure were preserved and re-introduced into the project, creating an invaluable testimony to the battles waged in Warsaw’s Old Town.

Not much is known about the history of this building from the time of its construction. It did not survive the uprising – after the dust settled, only the basement and parts of the ground floor remained. The whole Nowomiejska Street was the very center of the fighting. Some photographs of barricades built along Nowomiejska Street have been unearthed, and at number 7 may have housed a water intake station, which local tenants used before it was filled in. Thanks to the documents and information found in the archives of Warsaw Uprising Museum , we can surmise that the structure collapsed on the 19th of August 1944, burying its residents with it. Among others, Michał Stranowski, a zoologist and veteran of the Polish-Soviet War, born in 1902, died under the rubble on that day. He had worked as a teacher in the 1930s and became the headmaster of a school in Warsaw. Later, during World War II, he organised secret classes for the youth.

The final decisions concerning the appearance of the reconstructed town house and the use of certain original elements were made by Stanisław Żaryn – a member of the Home Army during the uprising under the pseudonym “Bej” and a second lieutenant of the artillery reserves. After the war he became one of the most important architects of Warsaw. To him we owe the reconstruction of over 40 town houses and the columns of Sigismund III Vasa.

It is a little known fact that the mentioned antique doors do not come from the town house at Nowomiejska 7 but were moved here from a building at 35 Piwna Street. It is impossible to determine exactly why this decision has been made. Both tenements were destroyed during the events of August 1944, dismantled and rebuilt in the 1950s. It is possible aesthetics were the determining factor.

The tenement house was bombed during the uprising and collapsed, probably on August 19, 1944.

The tenement house did not survive the uprising. It was rebuilt between 1954 and 1955.

„We took water from somewhere in the vicinity of that house on Nowomiejska – that place that serves delicious ice-cream now. I don’t remember the exact number, because they switched them around later. But it was that building with the delightful ice-cream, pistachio is my favourite flavour. That’s where the water was and the long lines. My mother took my sister there once. And I have to say – my sister, Władzia, had to have paranormal abilities. […] At some point, she said to my mother: „Mom, let’s leave”. They were close to the intake, so my mom wasn’t really eager to leave. So Władzia shouted: “Now! I mean now!”. So my mother listened, and they left. A moment later bombs fell on that building, piercing the roof. These were incendiary shells, people burned alive. Mother helped with the rescue operation.”
Elżbieta Zofia Stolarczyk

„It was on Nowomiejska Street, opposite to the Pauline Fathers Church. I was coming back with some grenades. They were in a basket, and on top of them I’ve placed some apples. And suddenly I see three groups of Germans: two groups frisking people and one group with nothing to do. Fear sent shivers down my spine. I thought these were my last moments. But I used to be pretty insolent back then. I’ve approached the third group […] and said: “Excuse me, sir – would you help me? My mother lives nearby and is worried sick. Would you mind walking me there?”. He gave a salute, thinking that he picked up a girl. When he tried to take the basket off my hands, I said: “No, both my mother and I love apples. My nanny too. But for you – I can spare one.” He got an apple and walked me all the way to my house.”
Krystyna Kucharzyk „Klementyna”